Washington State has begun releasing preliminary unemployment data. We will share detailed information – e.g. unemployment impacts by industry and occupation, demographics, etc. – here as it becomes available. For now, here are a couple of graphs confirming what most of us suspected: a quick and dramatic loss of jobs here and everywhere.

Between mid-March and the end of April, Washington shed some 527,000 jobs statewide.  By far, the majority of those jobs were in service industries vs. goods-producing industries. 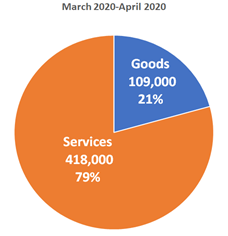 Just over 20,000 jobs were lost over that same time period in Thurston County, which, at nearly 15%, places us almost in the dead center of unemployment impacts among Washington’s thirty-nine counties:

Of course, what is particularly striking about the current unemployment rate is just how fast it hit.  The graph below shows how we went from historic lows in unemployment during the first quarter of 2020, to an unprecedented spike in the month of April:

In our next update, we will provide updates on actions local partners are taking to respond to the impacts of this pandemic, as well as some potential initiatives to help facilitate our economic relaunch.